SculpSure vs CoolSculpting: Which is Better? 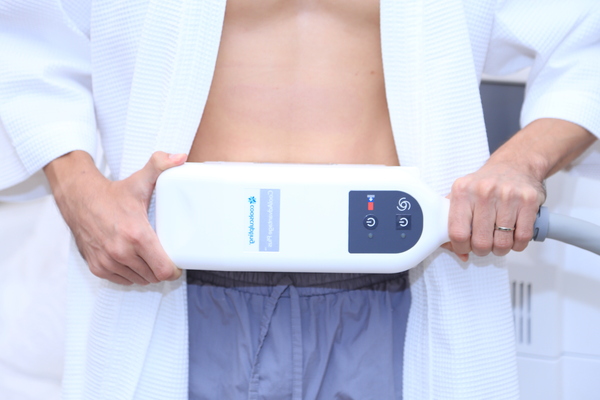 CoolSculpting and SculpSure are two fat-reduction procedures that are becoming increasingly popular. They both attack fat cells, despite the fact that they are nonsurgical and noninvasive. While CoolSculpting uses intense cold, SculpSure uses laser technology to produce similar results.

Which body sculpting technique is best for getting rid of stubborn fat in trouble spots? This is dependent on your schedule, pain tolerance, and the target area or places in question. In this blog, we'll compare and contrast SculpSure and CoolSculpting so you can pick the procedure that best suits your needs.

What is Lipolysis, and how does it work?

‍
Liposuction used to be the gold standard for eliminating body fat (lipids). This surgery entails cutting incisions in the problem location and suctioning out the excess fat.

CoolSculpting and SculpSure now offer lipolysis as an alternative.

The process of lipolysis is when fat cells are broken down into smaller molecules. Heat, cooling, ultrasound, and other technologies are used in lipolysis techniques, also known as body contouring, to eliminate fat without invasive surgery.

How do they function?

Heat, cold, and other stimuli affect fat tissue more than surrounding tissue (skin, connective tissue, muscles, etc.).
Fat cells decompose into their constituent parts when heated or chilled to extremes. These molecules (and their mass) do not, however, vanish from the body automatically.
Instead, the broken-down cells are carried into the bloodstream by other cells. The cells are gradually removed from the body, which can take up to three months.
While new lipolysis methods might not have the same quick results as liposuction, they do have one big benefit: a far shorter recovery time.

While new lipolysis methods might not have the same quick results as liposuction, they do have one big benefit: a far shorter recovery time.

For up to six weeks after liposuction, you may have bruising and discomfort. 1 Modern lipolysis techniques, on the other hand, are frequently touted as having "zero down time." While individual results may vary, you should be able to return to your normal schedule within a few days (or even hours).

Next, we'll look at SculpSure and CoolSculpting, two of the most popular lipolysis procedures.

SculpSure is a laser-assisted lipolysis technique that reduces the appearance of excess fat. Since 2006, laser lipolysis has been an FDA-approved procedure. 2 We've outlined a quick overview of how it works below:

Many people who have laser lipolysis are pleased with the outcome. The results of a 2017 study published in Lasers in Surgery and Medicine were impressive3:

Although 2.6mm may not seem like much, it equates to a fat decrease of up to 24%. We'll then get into the specifics of this technique.

Laser lipolysis, a slightly newer technology than CoolSculpting, is FDA-approved for the removal of excess fat in the following areas4:

This method also has the advantage of being able to safely treat multiple regions in a single fat reduction therapy session. Because the SculpSure procedure is so quick and painless, you can have it done on up to four different places at once.

SculpSure is designed for people with a BMI of less than 30.5.

The SculpSure treatment may be ideal for you if you're in good shape and want to lose fat in a specific problem region (or two). It may not have the desired effect if your objective is to lose significant fat and weight.

When you obtain SculpSure, what should you expect? Because of its speed, this method is commonly referred to as "lunchtime lipo."

Although this process is advertised as having "zero down time," you may have some sensitivity at the treatment site, but you should be able to resume your normal routine immediately afterward.

Do you have any questions about how coolsculpting works? CoolSculpting, like SculpSure, kills fat cells. However, in this situation, it does so by exposing cells to severe cold, a process known as cryolipolysis.

What is the efficacy of cool sculpting?

CoolSculpting is one of the most popular dermatological procedures in the United States, with a high level of patient satisfaction.

The effects of cryolipolysis after three months were investigated in a paper published in Dermatologic Surgery in 2013.

According to another study, persons who have CoolSculpting can anticipate to lose an average of 80% of their top layer of fat.

CoolSculpting is a little different technology than SculpSure, which may target various regions, including thin layers of fat.

CoolSculpting can only be used in locations where there is enough additional fat to pinch because it suctions the skin before cooling it.

The method, on the other hand, has a wide range of FDA-approved applications. The following are some possible target areas:

When you go in for a CoolSculpting procedure, what should you expect? This method is minimally invasive, fast, and somewhat painless:

The majority of CoolSculpting adverse effects (if any) fade away within two weeks.

Choosing the Best Procedure to Achieve Your Beauty Objectives

CoolSculpting vs. SculpSure: which is best for you? To assist you in making your decision, we'll compare them based on a few essential factors:

To learn more about the cost and suitability of each of these procedures, Contact Us.

Since the days of liposuction, fat removal has come a long way.

Now, with to technologies like SculpSure and CoolSculpting, removing fat from difficult places that don't react to exercise or conditioning is relatively quick and painless.

Nonetheless, lipolysis takes place through your skin, exposing your delicate epidermis to intense heat and cold.