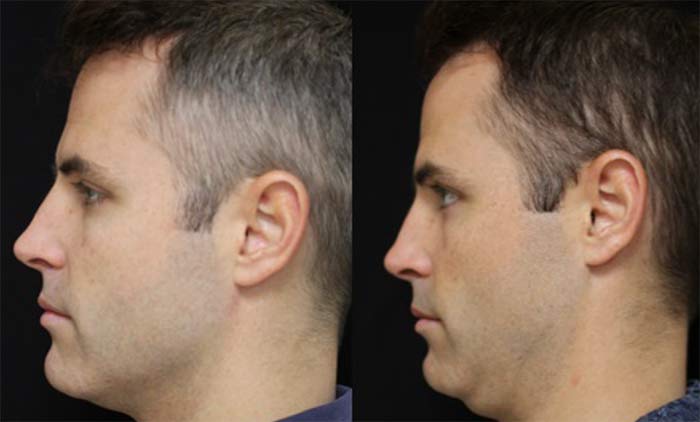 Dr. Nahal is a pioneer in nonsurgical body contouring andwas one of the first physicians in Dubai to use CoolSculpting for fat removal.CoolSculpting is a groundbreaking fat-reduction technique that involvesfreezing fat cells in a specific area and reducing fat by 25% with just onesession. As the popularity of cosmetic procedures, such as non-invasive bodycontouring, grows year after year, CoolSculpting has become an importantelement of Dr.nahal's practice. Dr. nahal has been using CoolSculpting to treatpatients for over ten years, when it was initially FDA approved for fatreduction. In 2015, CoolSculpting introduced the CoolMini, a new applicatorthat was specifically developed to treat the double chin, or submental fat,without surgery.

According to an Allergan clinical study, almost two-thirdsof Americans are disturbed by their double chin. The natural contours of theface are distorted by a double chin. One of the reasons CoolSculpting hasbecome such a household brand is that there is no downtime, no needles, and noneed for anesthesia. Many patients are unable to reduce their submentalfullness while leading a healthy lifestyle since these fat cells are resistantto typical eating and exercise strategies. CoolSculpting features a distinctapplicator for each location, from bra fat to abdomen fat to banana rolls, armfat, and neck fat, with fantastic treatment results.

What is CoolSculpting and how does it work?

CoolSculpting targets and reduces fat cells without causingdamage to the surrounding cells and tissue, thanks to a proprietary,FDA-approved, and clinically proven chilling technique called cryolipolysis.Fat cells are very sensitive to cold temperatures, according to scientists, andthese fat cells may be frozen and killed in a controlled manner. ZELTIQ createdCoolSculpting, which was later purchased by Allergan. The purpose of thecryolipolysis technique, sometimes known as "fat freezing," is toreduce fat naturally and gradually. Dr. nahal will use a cooling applicator totarget the specific area of the body for fat removal during the CoolSculptingprocedure. The applicator nahal the tissue between the cooling panels withvacuum pressure and gives precise, regulated cooling to the fat cells in thetissue.

In a procedure known as cryolipolysis, the chillinginitiates a process that eventually destroys the fat cells in the treatmentarea. Certain applicators, such as the CoolSmooth, which targets fat cells onthe outer thigh, work without suction. CoolSculpting helps our customers loseweight by reducing stubborn fat bulges in just four months! Without any sideeffects or downtime, the fat cells in the treated area are gradually reducedthrough the body's natural metabolic processes. CoolSculpting isn't aweight-loss solution. This fat-freezing procedure is helpful for patients whoare at or near their desired weight but have a specific fat bulge that needs tobe treated.

Is it possible to get rid of a double chin withCoolSculpting?

Yes! CoolSculpting is the most effective way to permanentlyremove fat cells and treat them. Cryolipolysis is a non-invasive procedure thatminimizes the appearance of a double chin without the use of surgery, downtime,or needles. Areas of intractable fat, such as the double chin, are removed throughcryolipolysis, which uses freezing temperatures to freeze fat cells. In Dr.nahal Upper East Side Dubai dermatology office, the CoolMini CoolSculptingprocedure is one of the most popular.

For the neck, which is better: CoolSculpting orLiposuction?

Before CoolSculpting, the only way to get rid of a doublechin was through liposuction. Liposuction is a very intrusive surgery performedby plastic surgeons that results in substantial bruising, swelling, and painthat lasts for several weeks. Most people chose CoolSculpting and Kybellainjections to avoid the pain and downtime associated with surgical procedures.Furthermore, one of the advantages of Kybella treatment is that it has someadditional skin tightening effects that occur as a result of the injections.Liposuction is in direct contrast to skin tightening. Due to the abruptsurgical removal of fat from the treated area, this type of plastic surgery maycause the skin to sag. This is why CoolSculpting with the CoolMini applicator,as well as Kybella Injections for submental fat, have become so popular for theeradication of the double chin in Dr. nahal Green's private Dubai office.

The CoolMini applicator was first introduced byCoolSculpting from ZELTIQ, which was later bought by Allergan. It is ideal fortreating fat deposits on the neck and under the chin. This applicator's size,shape, and curve ensure that it will comfortably fit a tiny region throughoutthe revolutionary, proven fat freezing procedure. Treatment with the CoolMiniapplicator can produce apparent benefits in as little as four weeks, with fullcosmetic results taking four months.

What exactly is a CoolMini?

CoolSculpting created the CoolMini adapter, which targetssmall areas of fat such as beneath the chin, above the knee, and in the braarea. Many people are concerned about the accumulation of fat beneath theirchin, and more people are looking for non-invasive solutions to address thisfat. You can't hide or mask fat beneath the chin with clothing or exercise,whether it's due to lifestyle, age, or genetic causes. According to Zeltiq,22.4 million people in the United States are looking for non-invasive fat lossalternatives. CoolSculpting has the answer, due to the CoolMini and othernon-invasive fat reduction CoolSculpting applicators. The CoolMini is the mostmodern non-invasive fat reduction therapy for the treatment of submentalfullness, or double chin.

In terms of lowering fat in the double chin, Kybella andCoolMini work in tandem. The choice between CoolMini and Kybella injections forpatients with extra submental fat is critical. If there is a lot of fat in thesubmental area, for example, it's vital to use the CoolMini to debulk the areafirst. If there is any remaining fat in the neck area after treatment, Kybellainjections can be used to address these tiny pockets of fat and tighten theneck area.

Treatment of submental fat with CoolSculpting

CoolSculpting is the most popular treatment for submentalfat and eliminating the double chin. The appearance of a double chin bothersboth men and women. More patients are concerned about the contour andappearance of their neck and jowls than ever before, perhaps as a result of theincrease in Zoom, selfies, or Instagram. Because of its ease of use and lack ofrecuperation time, CoolSculpting has proven to be a popular surgery.

What is the cost of CoolSculpting for chin fat?

Each applicator of the CoolMini to treat the double chincosts $1,000. An applicator on each side of the chin is usually required for alarge neck. When more than one location is treated, there are often discountsavailable, which can amount to up to 25% off the procedure's cost. Dr. nahal go over the treatment applicators, the cost for each region, and the timeinvolved in each treatment area during your consultation. Multiple locationscan be treated on the same day with the treat to transformation procedure, anda customized treatment plan will be created for you.

What can you expect from the CoolSculpting treatment fora double chin?

Many patients are dissatisfied with the excess fat undertheir chin and desire a smoother jawline and neck. The CoolSculpting doublechin treatment entails attaching an applicator to each side of the neck andtreating each side individually to best decrease the overall double chin. Thisdouble chin therapy is required in the majority of patients, especially ifthere is a considerable quantity of submental fat. To "DEBULK" thesefat cells and give the optimum fat reduction to contour the jawline and jowlarea, it is often ideal to treat the double chin in this method twice, onemonth apart.

What are the areas that the CoolMini can help with?

·     Treating the double chin inthe submental area (below the chin).

·     Arm fat can be especiallyevident around the axillae (armpits), and the CoolMini can treat this smallunderarm area.

·     Fat accumulates on thesides of the bra area as we age, and the CoolMini and CoolPetite can beutilized to reduce fat in this area.

·     Above the knees — droopingknees and excess weight make us uncomfortable in skirts and shorts. Exercisealone will not tone your legs, but the CoolMini can help you burn fat andachieve a smooth, defined appearance.